Everything you ever wanted to know about emojis

From smiling faces to coconut shrimp and even unicorns, there are close to 2000 emojis available on pretty much every social media platform. Ever since the Oxford Dictionary controversially chose the ‘laughing crying’ emoji as the 2015 Word of the Year, the expressive yellow faces have been accepted as standard in modern, digital communication.

“Online communication is increasingly and powerfully nuanced by the use of emojis,” says Professor Tommaso Milani, an Associate Professor of Linguistics at the University of the Witwatersrand (WITS). This is reinforced by a 2014 Scandinavian study, entitled The Communicative Functions of Emoticons in Workplace E-Mails: :-). The authors found that emojis “function as contextualization cues”. They’re used for three primary reasons - to indicate positive emotions, to point out jokes and to soften or strengthen messages.

Emoji started as emoticons, the punctuation based symbols used to create expressions in early text messaging. Since the late 1990s in Japan, emoji unexpectedly took off worldwide after their inclusion in Apple’s iPhone.

And no wonder: what digital communication lacks is contextual clues, and without a sign guiding their interpretation, messages are often read negatively. Emoji are so successful at providing emotional context to text only messages, that, according to Wired, “They’re killing off netspeak. The more we use emojis, the less we use LOL and OMG.” More than that, as I wrote in Daily Maverick, there’s more to the pictorial symbols than what you see: “Emojis symbolise a range of other meanings (let’s just say the brinjal emoji means something other than a brinjal in the US)”. Emojis are a great way to track sentiment and are used differently across the world.

Unsurprisingly, the most commonly used emojis are those expressing emotion. Says Vice, “SwiftKey aggregated more than 1 billion emojis sent by millions of users of its keyboard cloud system (an opt-in service that analyzes what users type to responsively predict their most-used words) between October 2014 and January 2015. Unsurprisingly, SwiftKey found the traditional smiley and frowny faces far outpace the other emojis: close to 60 percent of all emojis sent were traditional faces, with happy faces more popular than their mopey counterparts.” 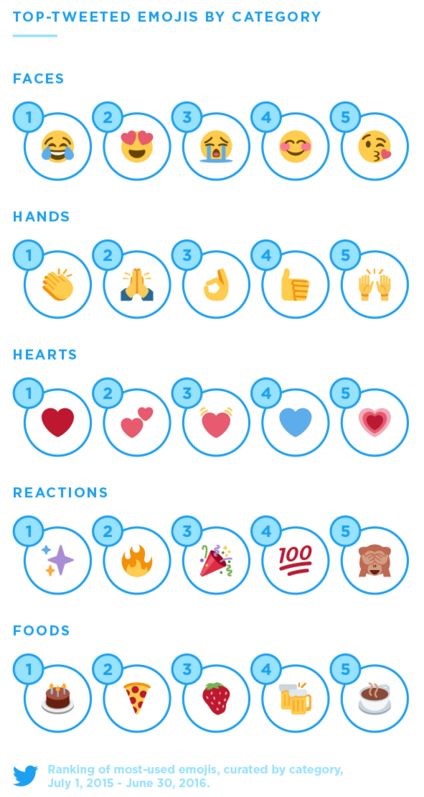 The symbolic use of emojis extends to in-group use too. SwiftKey did research on the most commonly used emojis from Game of Thrones fans, and found symbols like snowflakes, wolf faces and swords used commonly.

What does this mean for marketing?

Don’t be afraid of using emojis in your marketing, in everything from social media to emailers  - they add a relatable element to your posts and they increase engagement. Best of all, emojis work across all age bands, not just the tech savvy younger generations.

According to Contently, “Even non-millennials still use emojis regularly—only about 8 percent of people never use them at all. In short, don’t be afraid to use emojis to communicate with older demographics. Your audience shouldn’t have a problem understanding the context of a sad face, regardless of how savvy they are with technology.”

In fact, the bigger difference was between genders rather than ages: 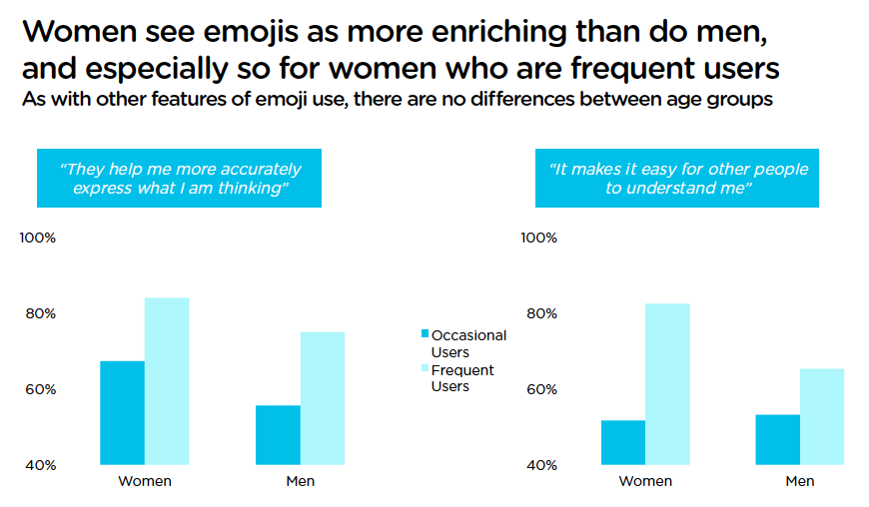 Emojis are such a useful indication of popular sentiment, that you can track them live on Twitter with sites like Emoji Tracker.

All of this just goes to show that no matter how much things change, they stay the same. Despite the proliferation of communication and the huge variety of platforms available in the growing digital landscape, the expression of emotional tone is still a crucial factor in communication.

Here are some tips on emoji etiquette in the workplace:

Emoji etiquette
Using emojis or emoticons in the workplace is a confusing maelstrom of mixed messages, but by answering these simple questions your emoji etiquette will always be on point.